Discussing how I arrive at a concept.

Last week I wrote about prototyping a board game and I shared my prototyping techniques for Scoville. This week I am sharing my concept process. How do I come up with a game design? Do I choose a theme and then add mechanics? Or do I choose a mechanic and then slap on a theme? Do I purposefully try to integrate an appropriate theme for the mechanics? These are the sorts of questions I’m answering today in a “self-interview” format.

Q: Where do you get your inspiration?

A: Everywhere awesomeness can be found. I can be easily inspired by just about anything. Make a game about boll weevils? Sure! Make a game about nuclear radioactive decay? Why Not! My main rule of thumb for game design, whether it’s the concept phase, prototyping, or potentially pitching a game is this:

Make sure it’s fun and relate-able!

If what you are designing is something that is fun, then the theme can be just about anything. I usually get inspired by the things that I spend my time on. If I’m enjoying the NCAA basketball tournament I’ll probably start thinking of making a card game where you represent a team in a region of the bracket and via set collection and hand management you have to play the right cards to get your team through the Final Four and eventually to win the championship. If I’m working out in the gym I might be inspired to design a game where you are a person who is trying to lose the most weight. You’d have to compete against the other players to burn the most calories or increase your bench press weight the most. The bottom line, though, is that it must be something fun. Players may love a set collection/hand management game, but if the theme is something boring that no one can relate to, then maybe you should come up with something else.

Q: Regarding a game designer’s Chicken vs. Egg Debate: Mechanic or Theme first?

My inspiration is typically theme based, so I usually start there. I’m not a huge fan of abstract games, either. So that probably guides me toward choosing a theme first.

When you choose a theme first it allows you to sort of steer your game in a direction that fits cohesively. Once you have a theme you can pick and choose the mechanics that you think will work best. Imagine you have chosen the NCAA tournament theme. It would be important to understand how the tournament works. You have 64 teams playing games over several weekends. Each game eliminates one team. Eventually you get to a Final Four. So once you understand how the tournament works you can then start to add mechanics. One way to do this would be to have players each represent one region of the tournament. Your objective would be to get your best team into the Final Four. Other players can play the spoiler role and try to cause upsets in your region. To do all this you could use a blind card mechanic with a drafting round before players apply cards. All players could draft a card and then cards could be played onto each game. The overall idea here is that when choosing a theme first you can then go and apply mechanics that you think fit the theme AND make the game fun.

On the other hand when you choose a mechanic first you are almost automatically starting with a more abstract game. A theme could be slapped on that probably fits the mechanic. Or a different theme. Or another different theme. The reason I typically don’t start with a mechanic is because the theme part of a game is typically what makes a game fun and relate-able. That’s just how I roll!

Q: What about boring themes? People seem to like them too!

Valid point, self. So there are a lot of games that have very boring (my opinion) themes that people still really like. Farming, for example. How can a game about farming be fun? The game Agricola is the third highest rated game on BoardGameGeek.com. So clearly the theme isn’t the whole picture in whether a game is fun or not. In fact, many Euro style games involve “trading” or “resource management,” which can be very boring topics. The key is this:

When the theme is boring, make sure the mechanics are innovative and unique (and fun!) (Or have awesome artwork!)

Q: You keep mentioning “Fun.” How do you make sure a game is fun? 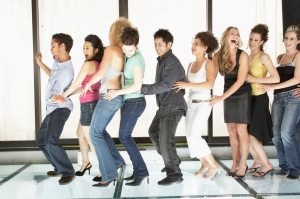 When I first got into designing games I searched for articles about making games fun. I found some interesting things that I wanted to list here. Some of them are less about fun and more about making a game “good.” But it’s my philosophy that if a game isn’t good, it won’t be fun. So making a game “good” is a prerequisite for making a game “fun.” Here are my rules of thumb for the conceptual phase of the game design process:

Let’s quickly run through why each of these is important for making a game good and fun:

Interaction: If there is nothing you can do to affect the other players, then you’re playing a solo game against other solo gamers. Not fun. If there is no interaction on a verbal level then it doesn’t matter that you’re sitting around a table with friends. You may as well make your game into an app that people can play when they’re sitting on the toilet. Provide a way for players to interact in the game.

Options: Without options a game of strategy or tactics or even luck becomes a simple matter of doing whatever it is that the game is forcing you to do on your turn. That’s no fun at all! Designers: give your players options! Don’t turn us into robots.

Paths to Victory: It’s important for players to be able to play your game in different ways. This can be as simple as having destination tickets like in Ticket to Ride. Or it can be complicated like choosing the best way to fill in your estate in The Castles of Burgundy. Just make sure that you’re giving the players different ways to reach a winning condition.

Runaway Winner: I just as easily could have said to avoid player elimination. With a game where a player can get so far ahead that no one can catch up it is effectively player elimination anyway. A good and fun game design will include a way for players to catch up to a leader. This can be done several ways, including hindering the leader or benefiting a last place player. Think of the NCAA thing again. Which games are more enjoyable to watch, blowouts? or close games where a team was down big and they came back and hit a buzzer beater at the end?

Of course there are other things that can determine whether or not a game is any fun. Those above are just the main five things that I always keep in mind when designing a game. Another one that I did not mention because it is difficult to get right in a game is having an ever increasing amount of tension in a game. That is one of the things that Agricola does really well. This can be done by having limited resources or a first-come-first-serve option. Agricola has both!

So you’re going with Boll Weevils, huh? Could be worse!

You’ve chosen an interesting theme that could be fun and is relate-able. Where do you go next? I like to do a little research about whichever topic I’m thinking about designing into a game. When doing the research I try to figure out things about the topic that would work well for game mechanics.

In the Boll Weevil example I just learned that boll weevils, though not native to the United States, migrated here in the 19th century and by the 1920s had devastated much of the cotton industry. So perhaps while the boll weevil theme itself may not be very fun or interesting, as a designer I could go several different routes. I could make the game be a cooperative game about controlling the infestation. I could make it so that players represent individual boll weevils trying to infest the largest amount of territory. I could even make the game about farmers trying to grow the best cotton while other players can launch infestations of boll weevils on their opponents. So I could definitely produce a game about Boll Weevils. Question is, would anyone care?

The point is that once you choose a theme, do a little research and figure out what you really want the objective of the game to be.

Q: How do you add mechanics?

Now that you’ve gotten to the point of understanding what your objective is in your game it’s time to start turning it into a real game.  The key is understanding the theme. You don’t want to add things to your game that don’t really fit the theme. I recently ran across this with the game Archipelago. There are mechanics in that game that just don’t seem to fit the theme of exploring an archipelago and dealing with indigenous persons. One example is that if the rebels are advancing you can get them to stop by selling fruit. But you aren’t selling fruit to the rebels. You simply have to sell fruit. It just didn’t make much sense to me.

So when I think about adding mechanics to the theme I figure out how the theme really works. It’s like the boll weevil example above. Since boll weevils spread and infest I would probably add a mechanic where a swarm of boll weevils is taking over precious territory.

I also like to keep in mind the 5 points I made above about making a game good. If a mechanic adds too much downtime, for example, I might not go with that mechanic. Or if a mechanic has no player interaction I’d probably leave it out. It is important as a game designer to be cognizant of how the mechanics in your game not only allow for players to reach the game’s objectives, but also to make the game good and fun!

Game designers face an interesting challenge. The whole idea of creating a game is almost a game in and of itself. Designers strive to make games that are fun, induce emotions from the players, create an atmosphere of engagement between players, and be innovative all at the same time. Finding a theme, applying mechanics, and balancing the game are all things that go into making a great game. If there’s a game out there that you really enjoy, find the designer on Twitter and thank them! A lot went into that game!