Can you win the awesomeness?

Back in March I hit the 200 follower plateau on Twitter. At the time I gave away a copy of Love Letter. This time around, since there are twice as many of you, I’m making the prize that much better! This time I’m going to give away a copy of Smash Up.

Why Smash Up? Because all you Twitter Followers are a smash up of awesomeness with people who write blogs, manage Ludological Portfolios (I’m looking at you, Brian!), design games, playtest games, love games, and even some of you who succumb to the desires of the barley!

Here’s how it works. All you have to do to qualify for the prize is this:

In the game each player has a smash up of two different factions. So one player may be Wizard Ninjas while another player is Robot Dinosaurs. So tweet me your best smash up that’s related to beer and board games! The more creative and interesting, the better chance you have to win!

I’ll choose a winner tonight at 8pm Central. So make sure you have your tweet in before then!

UPDATE (8:30pm): The winner has been chosen! Congrats to Eric Leath of Games & Grub for the Smash Up deck that made me laugh and cringe at the same time:

And two honorable mentions go to J. Alex Kevern for his nice, rhyming Smash Up Deck and to Todd Edwards for this Specific Gravity Paralysis:

Unforunately only Eric wins the prize. Thanks to everyone who participated. I hope you enjoyed the giveaway contest. My next giveaway will be when I hit 600 followers. I’m hoping that giveaway will be a prototype of Scoville!

And just for fun I made my own base: 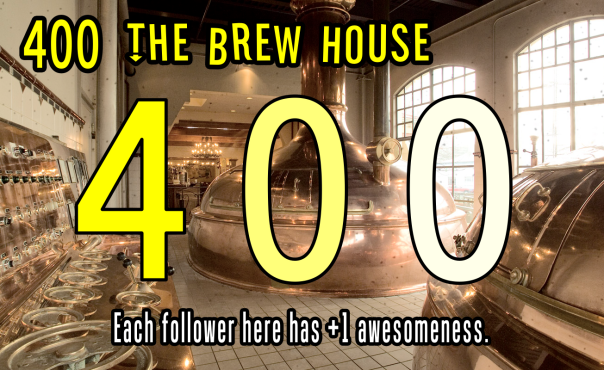 Not very playable, but it helps me celebrate 400+ awesome followers!

Posted in The Barley, The Boards

Here we are… either recovering from con crud (thankfully I wasn’t struck by that beast) or desperately looking forward to Spiel (alas, I will not be able to attend). Never-the-less we keep pushing forward in our consumption of barley-derived beverages and cardboard creations.

It’s Monday, so it’s time to recap the Boards and Barley that I enjoyed last week:

Leinenkugel’s Honey Weiss: With the summer coming to an end since I live in Wisconsin, I have to finish off the Honey Weiss that I have. So I enjoyed one of these while participating in a Fantasy Football draft. Unfortunately it doesn’t appear to have helped my draft choices.

Leinenkugel’s Oktoberfest: I know, it’s a little early for Oktoberfests. But it’s one of my favorite beer styles, so I enjoy it when I can. I liken it to drinking Egg Nog in November even though it’s really a Christmas beverage.

New Glarus Spotted Cow: This one is a staple for many Wisconsin beer enthusiasts. It’s technically a farmhouse ale, but I would almost put it in a class with cream ales. It’s easy to drink and it’s delicious.

That’s it for the Barley this week. Let’s see what I played:

Hanabi: My level 1 friend Jeremy and I taught Hanabi to our wives. Mine was bored with the game. But she admitted she’d be willing to play it again. I think we ended with 19 points, though, which is pretty decent.

Via Appia: This was a GenCon purchase of Jeremy’s and I was particularly excited to play it. There is a really cool pusher mechanic where you can try to push stones off and earn the corresponding stone tiles. This game wasn’t a very complicated game, but I had fun with it. I’d like to try it with 3 or 4 players rather than just two. Image from BGG.com.

Scoville: On Saturday I visited with some friends in the Chicago area and they requested to play Scoville! So it hit the table and I was able to try out a newish variant with bonus abilities. They enjoyed the game though one player ended with a really low score. And the bonus abilities worked well enough for me to add them into the rules as a variant.

The Little Prince: If you read my review of the game last Friday then you already know that I really enjoy this game. It is so much fun and I love the little intricacies of the strategy.

Dungeon Roll: I went on a nice solo delve for the first time and was pleased with my result. Using the Archaeologist I was able to score 26 points. My big success was slaying a dragon in Level 2 of the dungeon. I love the whole presentation of the game. It felt like I was actually delving a dungeon and using my heros to defeat enemies. I’m looking forward to my next delve.

So that’s the Boards and Barley I enjoyed last week. But I need to mention one other thing today…

It’s Time for a Giveaway! Almost…

I hit 400 followers on Twitter over the weekend. I can’t believe so many people follow me and read my blog. You all are awesome and I’m inspired by you guys every day. So as a way to show my appreciation for the Twitter game design community I’m giving a game away. I haven’t decided which game to give away, or how I’m going to do it, but later this week I’ll post an article all about it. That will likely be on Thursday. So keep tweeting and enjoying the boards and barley!

Posted in Board Games, Monday Brews, The Barley, The Boards

This is more of a side note than anything. But Boards & Barley is now on Tumblr!

What does that mean? It means I now have a good way to have all my photos in one place. And since I’ll be sharing a lot of photos from GenCon it seemed like a good time to start the Tumblr feed.

If you don’t want Tumblr, no worries! I have it synced to my Twitter account and so the Tumblr posts will also be tweeted there. So if you already follow me on Twitter, you’re already set up to see the awesomeness!

Yesterday I got to 200 followers on Twitter! So to express my gratitude and share the love I’ll be purchasing a copy of Love Letter to send to one lucky follower!

Here’s how it will work. I’ll tweet about this article. To be eligible to win Love Letter all you have to do is favorite the tweet and be located in the continental US. I will randomly choose one eligible lucky winner from the list of people who favorited the tweet. Pretty simple!

Once the winner is chosen I will send a direct message to obtain the shipping address. The game will come directly from the online game store.

Thanks to everyone who follows me! Hopefully some day I’ll be able to give a published game of my own design as a giveaway prize! Don’t forget to favorite the tweet!

UPDATE: You can favorite the tweet here instead of scrolling through my tweets to find the right one:

200th Follower Giveaway. Favorite this tweet and live in the US for your chance to win Love Letter! http://t.co/WNG85yMD3H

Posted in The Boards