Welcome back to Boards and Barley. It’s been 20 days since I last posted anything. Why? Because board gaming stuff is a hobby and not a job (Though if that changed it would be pretty sweet). I love blogging about board game stuff, but when things get really busy this hobby falls to the back seat before anything else. Never-the-less, I’m going to adjust my schedule so that I can continue blogging and sharing tips about homebrewing and designing board games.

One of the first things I want to do is to renovate (i.e., create) a Game Design Page that compiles all of my articles about the game design process. I’ve posted stuff about game design from concept to publication and I think having all that in one place would be really useful.

I also want to start a regular Tuesday article about beer that focuses on a Beer of the Week. I like to try as many new beers as I can and I’d like to share my thoughts about the beer and its style with you.

Another thing that I’ve missed doing are the “Design Me” game design exercises. These are relatively easy to post so I think I’ll try to get back into those. Plus, they are very beneficial for game designers as they help flex your game design muscle.

But today is Monday so let’s check out the Boards & Barley I’ve been enjoying!

I bought a six pack of this brew at my FLBS (Favorite local beer store) because they were giving away samples and because the proceeds would go to support the local Honor Flight. For those not aware of the Honor Flight program, it is a program that takes war veterans to Washington DC to visit their respective war memorials. Then there are usually nice crowds to welcome the war heroes back home when their airplane lands. With a father who was in the military and with a brother who has served tours of duty in places I would never want to go I am very happy to support the military whenever possible, and the honor flights are a great way to do so.

My sister beat me and become the Harbour Master!

There is a lot of game in this little box. In Harbour players try to manage their resources, ship goods, and buy buildings. There are a lot of interesting decisions to be made while hoping your opponents don’t modify the market and sweep the rug out from under your feet. I’m glad I backed this Tasty Minstrel Games project on Kickstarter.

It’s gonna be 48 degrees here in Wisconsin today so that’s pretty awesome. Also awesome is that the college basketball tournament is approaching. I love the tournament because the kids playing college basketball put so much heart into it compared to professional sports where it’s more about money. But this website isn’t for writing about sportsball.

So let’s see what Boards & Barley I’ve enjoyed over the last week:

My friend Jeremy brought these back from a recent trip out west and graciously shared them with us. It was a very enjoyable beer and was characteristic of Vienna Lagers. I’d love to visit the brewery someday. By the looks of their website they’ve got a great brewpub.

Alchemists was a ton of fun. The gameplay is great. The theme works really well. The deduction is intense. I lost badly but I seriously enjoyed the game. The only downsides for me were that there’s a pretty steep learning curve. The first play took us three hours. That included the time it took to teach, though. The bottom line was that I thoroughly enjoyed the game and I can’t wait to play Alchemists again.

Ziggurat is coming along nicely. I have been working on it feverishly so that I can have it ready for Protospiel-Milwaukee in April.

The problem that was mentioned about the game in it’s previous form was that if you weren’t building you were falling behind. And the first to build got the better bonuses so they could build better and faster and become a runaway leader. That was a bummer.

So I’ve come up with a new, more “Euro” system of playing this game. It will turn the game into more of a point-salad, “Feldian” type game, but those are the types of games I enjoy.

The solution I came up with changes the game slightly in that it is mildly less accessible since the learning curve is steeper. However, the game play should be much improved as there are more things to consider on each and every turn. The scoring conditions are also improved. In the previous version the win would all but be known when the game ended. I prefer that players not know who is going to win before the end of the game. This gives all players hope that they might somehow sneak out a victory. So I’ve changed it so that there are a lot more points counted at the end rather than during the game.

Overall I’m really excited about where this is going. I think there’s a lot of potential here. But ultimately, this game is a lot of fun to design.

So that’s what I’ve been up to. What Boards & Barley have you been enjoying?

Posted in Monday Brews, The Barley, The Boards, Ziggurat

It’s been two weeks since I posted anything. Yikes. Life is busy when you have three kids. But no excuses. I have four articles in draft form that i just need to polish off. Hopefully that will happen soon.

But today is Monday, the day we celebrate the awesome Boards & Barley we’ve been enjoying over the past week or so. I’ve played some good stuff lately and even had an enjoyable IPA. So let’s start, as usual, with the Barley…

That dude is freaky, but the brew is good!

My friend Mark from Chicagoland brought this over when they visited a couple weekends ago. I have been trying to become more of an IPA drinker to mild success. This IPA, however, has a very nice and subtle sweetness to it that makes it more enjoyable for me. Thanks, Mark, for bringing it over!

Better than Race for the Galaxy, imho.

I picked this up at my FLGS (Favorite Local Game Store) when I was demoing Scoville. I’ve always like Race for the Galaxy but I’m not sure I’ve ever totally understood it. There are so many icons and it’s not totally straight forward to me. Roll for the Galaxy is much more streamlined and understandable. I love how they incorporated the dice for choosing and completing actions. The dichotomy of developments versus worlds is much more clear than in Race. Overall I thought this was great and I imagine it will be hitting the table quite a bit! 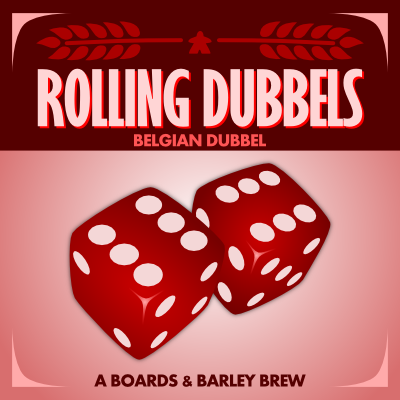 It’s Monday. The day that always gets people in a grumpy mood. So you’re back at work… sipping your coffee… thinking about all the fun you had over the past weekend. Maybe you tried some new-to-you craft brews. Perhaps a new-to-you board game hit the table. Well, the weekend is over, so get to work (after you finish reading, of course).

Before we jump into the Boards & Barley I needed to share this with you. It’s Tom Vasel’s Dice Tower review of Scoville, and it ends with a bang!

It already has been viewed 6500+ times since being posted on Friday! I will not admit how many of those views are from me.

Beautiful can art – Image via binnys.com

I cannot recall ever drinking a Belgian Single before. I’ve had Dubbels, Tripels, and Quadrupels, but never a single that I’m aware of. So when a friend cracked a can of this I thought I would enjoy it as well. It tasted very nice and had a more crisp character than the other Belgian beers I am used to. It was light in color and simple in character while possessing a Belgian flavor and style. I’d drink it again. Also, the can looked beautiful!

Makes me wish I had a beer!

My friends and I played this one in prototype form at Gen Con 2013 and really enjoyed it. It has an Agricola feel without the stress of feeding your family. The other main difference is that each round has two portions. The first utilizes workers to gather ingredients and the second utilizes brewers to brew beer or upgrade the brewery.

The thrust of the game is about brewing beer. Each game has nine different brews available, but they are different every time. Hooray for replayability! Players try to obtain ingredients so they can brew those to the best of their ability. Each brewed batch of beer provides the player with points. The winner is the player who brewed the most points!

So what Boards & Barley have you been enjoying? Anything new that really hit the spot?