It’s Monday. The day that always gets people in a grumpy mood. So you’re back at work… sipping your coffee… thinking about all the fun you had over the past weekend. Maybe you tried some new-to-you craft brews. Perhaps a new-to-you board game hit the table. Well, the weekend is over, so get to work (after you finish reading, of course).

Before we jump into the Boards & Barley I needed to share this with you. It’s Tom Vasel’s Dice Tower review of Scoville, and it ends with a bang!

It already has been viewed 6500+ times since being posted on Friday! I will not admit how many of those views are from me.

Beautiful can art – Image via binnys.com

I cannot recall ever drinking a Belgian Single before. I’ve had Dubbels, Tripels, and Quadrupels, but never a single that I’m aware of. So when a friend cracked a can of this I thought I would enjoy it as well. It tasted very nice and had a more crisp character than the other Belgian beers I am used to. It was light in color and simple in character while possessing a Belgian flavor and style. I’d drink it again. Also, the can looked beautiful!

Makes me wish I had a beer!

My friends and I played this one in prototype form at Gen Con 2013 and really enjoyed it. It has an Agricola feel without the stress of feeding your family. The other main difference is that each round has two portions. The first utilizes workers to gather ingredients and the second utilizes brewers to brew beer or upgrade the brewery.

The thrust of the game is about brewing beer. Each game has nine different brews available, but they are different every time. Hooray for replayability! Players try to obtain ingredients so they can brew those to the best of their ability. Each brewed batch of beer provides the player with points. The winner is the player who brewed the most points!

So what Boards & Barley have you been enjoying? Anything new that really hit the spot?

Another week gone by. And another summer weekend in the rear view mirror. And another tornado warning where I live. What a summer this shall be!

It’s Monday, so let’s take a look at the Boards & Barley that I enjoyed this past week.

This is a beautifully tasteful beer and perfect for warm summer evening enjoyment. Lake Louie, a local brewer, makes some excellent brews. This particular beer, a “California Common,” is Lake Louie’s first lager beer. It weighs in at 5.8% abv and possesses 30 IBUs. And it is really tasty!

What brews have you been enjoying?

I made a change to the brickyards based on a suggestion for a local world-class game developer and it took the game from “This is a game” to “This is special!”

It worked really well, increased player interaction dramatically, added a slightly more cut-throat nature, and most importantly made it more fun and enjoyable. I can’t wait to get it to the table again and keep working on it!

The only other game I played last week was Mutiny, which I should be able to write about in the near future. I’ll keep you posted on that.

What board games have you been enjoying? 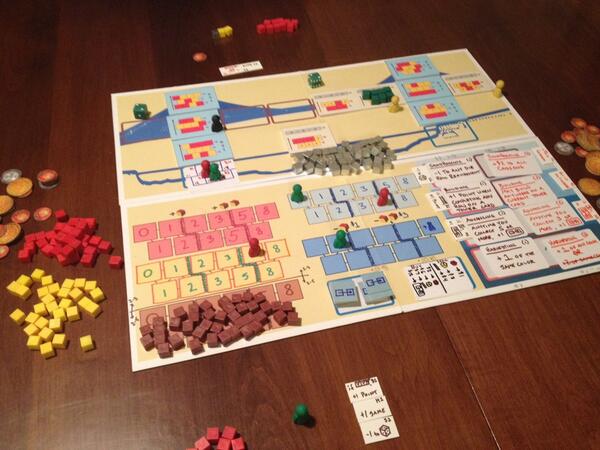 Posted in Brooklyn Bridge, Monday Brews, My Games, The Barley, The Boards

Well, Halloween is over and it’s now November. The leaves are just about all off the trees in my neighborhood. With the time change it’s dark when I get home from work. So you know what that means? It means that we might as well settle inside and play more board games! (and maybe enjoy some nice cold-weather brews!)

A new brewery in my hood!

Belhaven Scottish Ale: A delicious, smooth, enjoyable ale. If you’ve never had one, try it this week!

Tyranena Painted Ladies: At game night I grabbed one of these since the pumpkin ale season is ending and I figured I better enjoy one while I could. It’s nice that it’s not overly pumpkin flavored.

Newton’s Oatmeal Stout: I enjoyed more of my own homebrew. I think it’s pretty good. While it won’t win any awards, it’s definitely an enjoyable brew.

Wisconsin Brewing Amber Ale: I visited this brand new brewery on their Opening Day last Friday. This is a new brewery pretty close to where I live and my visit last Friday will certainly not be my last to the brewery. It’s not every day that a new craft brewery opens so close. I enjoyed the Amber Ale, but they also offered an American IPA, a Session IPA, and a Brown Porter.

Sierra Nevada Narwhal Imperial Stout: Potent. But not more potent than a typical Imperial beer. This was pretty good, but I’m glad I only had half a bottle.

Tyranena Sheep Shagger Scotch Ale: On Saturday I participated in a beer run at a brewery. I ran the 1/6th Barrel distance (4.37 miles) with a bunch of my friends. This is a fantastic event that sells out every year. With the entry you also get a great meal of lasagna, salad, and breadsticks. And you also get two beer tickets. I chose the Sheep Shagger because I love scotch ales and I can’t find this one in stores.

Tyranena Three Blondes Honey Ale: For my second beer ticket I chose the Three Blondes since I needed something lighter. However, I wish I had chosen the Imperial Coffee Porter since it was delicious (I got a sample).

Overall it was a pretty good beer week!

Compounded (x2): This recent Kickstarter arrival is a fantastic game. I have played it twice (once 4p, once 2p). The game itself is a compound composed of elements of science, fun, and awesomeness!

Star Wars X-Wing Miniatures: I got to play X-Wing for the third time. The third time went about the same as the first two. In each of those I had incredible dice results. In this case I finished off the game by rolling 6 hits from my last 7 dice. Beware if we ever match up on the X-Wing field!

Carcassonne: While I was at the Tyranena Beer Run waiting for the race to begin we got a 6p game of Carcassonne on the table. I must have been distracted because I played a pretty terrible game. I tied for 4th place, but only three points ahead of last.

Dungeon Roll: I played a couple games of Dungeon Roll with my kids this weekend. They are 4yo and 2yo. They absolutely love rolling the dice and grabbing the treasure tokens. My son chooses the treasures based on the color, which normally means he grabs blue ones. It’s a fun game and a great way to get my kids interested in gaming! Side note: Tasty Minstrel just launched a 14-day Kickstarter campaign for a Holiday promo pack for the game. You can check it out here: Dungeon Roll Winter Promo Pack.

I did not do any game design this week. I’ve simply been getting more and more excited about the Scoville Kickstarter project coming up in the next few weeks. While I don’t have a solid date for the KS campaign it is sounding like it will be up during BGG.con.

Speaking of BGG.con, I will be there demoing Scoville. If you haven’t played it, Tweet at me and stop by for a demo. I’m super excited to introduce it to more people. I’m also super excited that artwork is being done in advance of the KS campaign. In case you don’t subscribe to Tasty Minstrel‘s newsletter (you should!) then you probably missed the announcement that Joshua Cappel is on board to do the artwork. If you are not familiar with his artwork, take a look at Belfort since it is simply amazing!

As more information about Scoville becomes available I will keep you posted.