Got Gas? An Explanation of Beer Can Widgets

Getting a beer from the tap is one of the great pleasures of beer enjoyment. But what can you do if you are at home and you don’t have your own tap from which to pour? An invention called a Widget has you covered!

A widget is a device placed in a container of beer to manage the characteristics of the beer’s head.

The head is the bubbly portion above the liquid when the beer is poured. The head is a big reason for the increase in beer enjoyment when obtained from a tap rather than a bottle.

What exactly is a Widget?

That’s not a ping pong ball… it’s a Widget! (Photo via Wired.com)

Invented by Guinness, the widget allows for pub type enjoyment of beer in your own home. It is a small plastic ball filled with nitrogen gas. It also has a small hole in it. Placed into the beer can, the widget floats patiently while waiting for you to crack the beer open.

When a can with a widget is opened, the nitrogen escapes the ball and infuses the beer with tiny bubbles that become nucleation points. This allows the CO2 to separate from the beer and build the beautiful and creamy head. There is a beautiful cascading effect where the bubbles near the edge of the glass actually move downward. Watching the fine bubbles cascade and form a smooth delineation between beer and head is one of the most enjoyable things about pouring beer.

How should I pour it?

When I enjoy a widget beer I usually crack it open and pour it straight down into the middle of the glass. I have never had a widget beer overflow on me. But apparently I am doing it wrong.

Let’s learn how to pour a widget beer from the Guinness Master Brewer, Fergal Murray.

UPDATE: This video has been made private since I posted this article.

Did you notice the cascading bubbles? So beautiful!

What beers have widgets?

UPDATE June 4th, 2015: I originally had an image here but I had mistakenly only linked to the original blog post from where it originated rather than provide textual credit in the caption. I have received permission to use the image and I strongly recommend you read the “Beer With Widgets“ article from Chris Forman at Burgers And Beer Food Reviews. He does a great job (much better than I did) at explaining the widget as well as providing reviews of the beers in the image. Chris, please accept my apology. Here is the photo that Chris captured:

Notice anything about those beers? All of the beers in Chris’ image are English, Irish, or Scottish. (Note: He used a separate image for Guinness, which otherwise would have joined these beers)

I have had all except the Tetley’s and the John Smith’s as shown above. The most recent was Old Speckled Hen. Of those shown above I would saw my favorite is the Boddington’s Pub Ale.

There are breweries here in the US that are starting to utilize nitrogen in their beers. One of those is Left Hand Brewing which makes a Nitro Milk Stout. These do not use a nitrogen widget. Rather, they are already infused with the nitrogen, which gets busy once the beer is opened.

The foamy head and smooth characteristic of nitro beers is one that produces a love/hate relationship with many people. I happen to love a smooth nitro beer and I am looking forward to more nitro beers being available. Do you have any preference about nitro beers?

Posted in Breweries, The Barley

Every once in a while a really awesome game goes up on Kickstarter that I just have to talk about. This time it’s a game that aligns perfectly with what this website is all about – beer and board games!

Dice Hate Me Games is currently Kickstarting their newest game, Brew Crafters. This is a game design by Ben Rosset, whom you may know from the awesome game Mars Needs Mechanics. I had the privilege of meeting Ben at GenCon this past August and I can safely say he’s an awesome guy.

And if you are aware of previous Dice Hate Me games, then you know you can expect quality and fun in every box! (Compounded, VivaJava, etc.)

In Brew Crafters you are a craft brewer looking to make it big. Unfortunately you’ve opened your craft brewery at the same time as the other players. You all are starting small with limited equipment. Through a worker placement mechanic you can send your workers to obtain ingredients, perform research, obtain better equipment, and do all the awesome things a brewer would do.

Over the course of the game you will be upgrading and expanding your facility. Here’s what a starting and fully upgraded facility looks like in Brew Crafters: 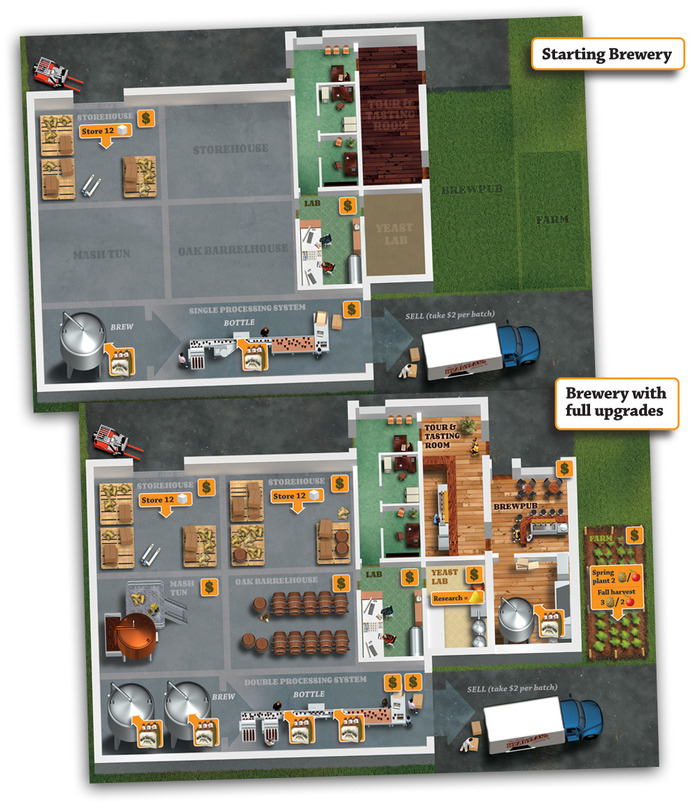 There is a great amount of competition in the game as brewers try to be the first to brew each different style of beer, or have the best tasting room to lure in customers, or upgrade to the finest facility.

If you like beer or board games or both, then you should consider backing Brew Crafters by Dice Hate Me Games!

Posted in Board Games, Breweries, Kickstarter, The Barley, The Boards

Today will be a different style of Monday Brews. Instead of listing the beer and board games I enjoyed I am posting a gallery of some of the things I played or saw at GenCon. Don’t worry. This is a family friendly gallery, which means I didn’t take any pictures of men or women that […]

Posted in Board Games, Breweries, Game Design, Monday Brews, My Games, Scoville, The Barley, The Boards.

Try the Silk Scorpion or the Undercover for some barley awesomeness!

If you live in the Madison, WI area and you like beer and food you should probably go check out the newest brewery in town: Karben4!

Located where the Ale Asylum used to be, on Kinsman Boulevard near the airport, they have six brews available to compliment their delicious menu items.

They don’t have a full website up yet, but you can visit the domain and learn the hours: karben4.com. Or you can learn a lot more on their Facebook page: facebook.com/Karben4.  Or you can follow them on Twitter: @Karben4. And they’ve been in the local online news outfits as well. Here’s a sampling:

When I visited I tried the Undercover Session Ale and the Lady Luck Irish Red. I thought both were very enjoyable. But my favorite was the Nightcall, which is a smoked Porter. I had only previously had one smoked beer and that was a very smoky brew. The Nightcall, however, had a much more enjoyable level of smoke flavor, which was present but not overwhelming. So I sampled and enjoyed three of their six beers!

But perhaps the highlight of our evening at Karben4 was the summer sausage sandwich. I would try to explain the amount of awesomeness this sandwich brings to the table but I’ll share a picture from Karben4’s Facebook page instead. Don’t drool too much! (Disclaimer: I did not personally eat any of the sandwich, but I have a really good sense of smell and this smelled of awesomeness. My friends both thoroughly enjoyed it!)

Even if you don’t like beer, you should visit for this sandwich! (So says my level 1 friends)

So when you’re looking for something to do head over to Karben4, grab some grub and a brew, and have a great time! And don’t forget to take home a growler full of brewing delight!

Posted in Breweries, The Barley

House of Brews Board Game Night

House of Brews is one of Madison’s rising stars of brewing!

Last night I had the opportunity to check out House of Brews off of Stoughton road in the Madison area.  Brett Myers (twitter: @brettspiel) was hosting a board game night there, so I decided to join him. Brett is a published board game designer, gardener, and hombrewer.  You can learn more about his game, Nanuk, at the BoardGameGeek page or the page at the Steven Jackson Games website.  He is also a co-designer of the forthcoming Lord of the Rings Dice Building Game by Wizkid Games.  So, as an aspiring designer it was great to be able to meet Brett in person.

I arrived around 7pm and the group was finishing up a game of For Sale.  This is a really fun filler-type game.  The game is broken into two halves.  In the first, players use coins to bid for properties valued from 1 to 30.  In the second half of the game players use their properties to earn income.  Income cards are values from VOID to 15,000, with two of each value.  At the end of the game players add any leftover coins from the first half of the game to the value of their income cards.  The player with the most money wins.

After they finished we joined the table next to us and a few more people showed up.  Brett got out the game Dixit by French publisher Libellud.  Dixit is a party game that is very similar to Balderdash, but rather than making a definition you’re telling a story.  I’ll review it in a different post, but here is a picture of the game:

Dixit Odyssey on the table (image from BoardGameGeek.com)

With ten people it was a really fun game.  I imagine that it could be a lot more fun with people you know.  Then you’ve got all those inside jokes with people and could have an easier time getting other people to guess your card.

During the game night I had the privilege to try two different brews.  I first had the Snug Oatmeal Stout and then the Standing Stones Scotch Ale.  Both of these beers were very delicious.  The Oatmeal Stout was perfect for a night where temperatures dropped to about 7 below (F).  And the Scotch Ale was a perfect beer for playing Dixit with ten people.

House of Brews has another really cool feature.  Many of you are probably familiar with CSAs (Community Supported Agriculture).  Those are where you sign up and get fresh vegetables and fruits.  Well, House of Brews has a CSB.  Of course the “B” stands for “Brewery.”  Customers can subscribe to receive beer by paying up front for either a 6 month or one year term.  You can find out more on their CSB Info page.  Sounds pretty cool to me.  I would consider signing up if I weren’t about to dive into the world of home brewing.

Overall I had a fun night.  It was great to meet Brett and learn from him.  He and I may try to set up a play-testing night prior to Protospiel-Milwaukee in March.  That would be a great opportunity to get some final tuning done based on his feedback prior to the convention.  It was also very nice to meet some other people who share an interest in boards and barley!  They’ll be having another Board Game Night at House of Brews two Tuesdays from now from 6:30-9:30.  You should join them!

Posted in Board Game Night, Breweries, The Barley, The Boards