Today will be a different style of Monday Brews. Instead of listing the beer and board games I enjoyed I am posting a gallery of some of the things I played or saw at GenCon. Don’t worry. This is a family friendly gallery, which means I didn’t take any pictures of men or women that were wearing less than they should have been wearing. Throughout the rest of the week I’ll be covering a few different games and experiences I had last weekend at GenCon, posted from a designer’s perspective.

Overall, GenCon 2013 was amazing. I met over 50 people in the board game industry, played some awesome games including a game I wouldn’t have normally even bothered looking at, and had a great overall experience. Here are some of the pictures that illustrate my 2013 GenCon experience: 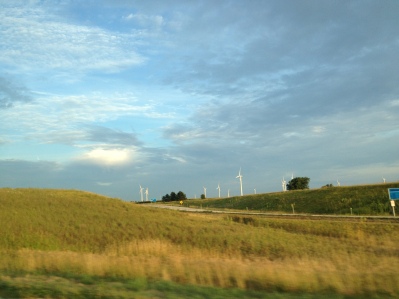 On the road to GenCon!

First pit stop for our crew, in Tonica, IL, where the gas station is over two miles off the freeway.

Scary incident at a gas station we stopped at. Eventually they pulled the guy out of the car, he resisted arrest, and they held him against the car and cuffed him.

We arrived at GenCon and quickly approached the exhibit hall!

Relic Runners looks interesting, but why are most games moving to a $60 price tag? Hard to justify that cost. 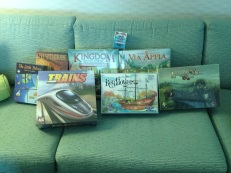 They couldn’t stop me from adding light posts to my planet in The Little Prince.

My completed planet in The Little Prince, which got me the victory with 50 points!

It was great to see Grant Rodiek’s full color version of Battle for York.

This is typical fair in the exhibit hall. 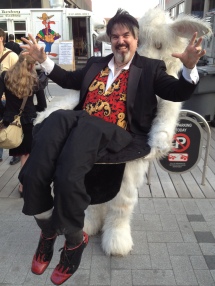 The costumes are a great part of GenCon and this guy took the cake. He was a rabbit pulling a magician out of a hat!

Called “Cardhalla,” this area is used for charity where people build card towers that will then be destroyed by people who donate. There weren’t any really impressive towers like last year. 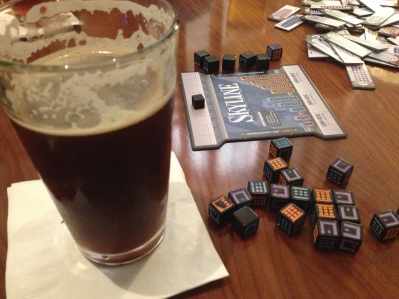 Skyline from Tasty Minstrel, procured by my friend in a trade, was a nice game to play while beginning the Barley portion of GenCon!

I had the privilege of meeting Tom Vasel and Eric Summerer of The Dice Tower. (I was giddy because Tom recently mentioned that he likes the theme of Scoville!)

I am ashamed that until GenCon I had not yet played Coloretto. This is a neat card game that randomly has pictures of chameleons on them.

Kings of Artifice by Wyrd Games

For some reason I really love the large versions of board games.

For some reason I really love the large versions of board games. 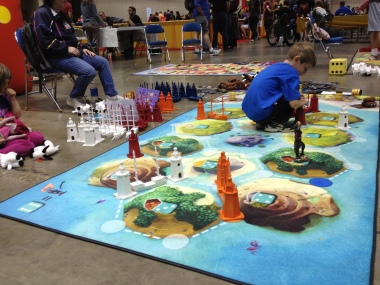 This sort of large map is a great way to get kids interested in board games! 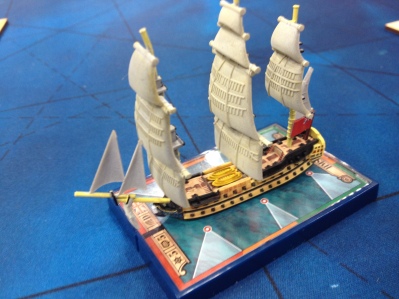 A beautiful ship from Sails of Glory. This game looked amazing and is said to work very well as a battle game.

Here is the board area for Sails of Glory. It has an X-Wing feel but obviously is about ship to ship combat. The mini ships are amazing.

The obligatory Wil Wheaton picture from GenCon in the TableTop area.

In the exhibit hall two of us sat down to try out Dread Curse. This was a neat role selection pirate game that can play up to 8 players.

The band (Zanna Doo) had a great sound and their covers were awesome.

Der Rathskellar Beirgarten. This was the best night out during GenCon.

I got a look at the boards for the Storm Hollow game. They looked really nice.

We got to demo Rialto from Tasty Minstrel Games, which I had already picked up from their booth.

Gotta love a Bentley, unless you don’t, but I do!

Unfortunately I only got Scoville to the table for three different groups, which included 7 first time players.