Though over half of Monday is gone already, I’m finally able to post my Monday Brews article. I hope your Monday is going well. As per my usual approach I present to you the Boards and Barley that I enjoyed this past week:

Ale Asylum Madtown Nut Brown: I enjoyed this with my boss and several colleagues as we greeted a former student who has returned to town. On tap it’s a pretty decent brew.

Rathskellar Red: This beer is produced by the UW Union and was very enjoyable as well.

Abita Fall Fest: I’ve had better beers and I’ve come to realize I don’t care for any from Abita. But if you’re in the mood for some New Orleans style, then Abita is for you!

Tyranena Painted Ladies: I’m a sucker for pumpkin beers and this one did not disappoint. Unfortunately it appears the season for Oktoberfests and Pumpkin beers is waning despite Halloween still over a week away.

Left Hand Brewing Nitro Stout: This milk stout was more enjoyable than the MKE Brewing Polish Moon Milk Stout that I wrote about previously. This was was much less “Earthy” tasting, thankfully!

Kentucky Bourbon Barrel Ale: I’ve decided that I do not care for strongly aged bourbon barrel beers. If I want bourbon I’ll just drink bourbon. This beer was overwhelmingly bourbon-y. I hate to say this, but I would have rather had a PBR.

North Coast Brother Thelonius: I enjoyed this while being a guest on the Building the Game Something from Nothing podcast that aired last night. It was a mighty fine brew in a delicious Belgian style that I will likely drink again! 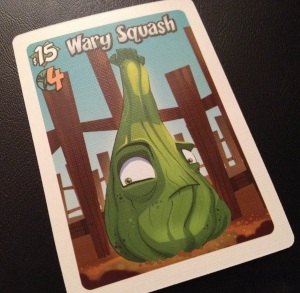 Farmageddon: I broke this out at Board Game Night and it was thoroughly enjoyed for its cut-throatty awesomeness. We played a tight game that ended up being not so tight as the winner had 46 points and last place had 16. This was a very fun game and I highly recommend it!

Scoville: I got to play my game again! I taught two new players and they both enjoyed the game. Scoville will be up on Kickstarter to coincide with BGG.con in November! I don’t think I could be more excited! Here’s another exclamation point just because!

Long Shot: We played with 8 players and utilized a few house rules to speed things up. The result was that we played the game in 35 minutes! The house rules included being able to bet $10 at a time and rolling both dice twice on your turn so horses move faster. It’s such a fun game and these rules made it more enjoyable since it didn’t take an hour and a half.

So those are the Boards and Barley that I enjoyed this past week, What did you enjoy?

Also, is there any interest in having a “Designer’s Corner” section in these articles where I discuss the designing work I’ve done each week??

Posted on October 21, 2013, in Monday Brews, My Games, Scoville, The Barley, The Boards and tagged board games, Buiding the Game Podcast, Monday Brews, Pumpkin beer. Bookmark the permalink. Leave a comment.