I’m Pulling for Him – An Interview with Chevee Dodd

Today we have the first ever interview on Boards & Barley and I’m happy that it is with the magnificent Chevee Dodd of West Virginia fame and folklore. Chevee currently has a Kickstarter campaign for his awesome trick-taking card game, Pull! I played it in March at Protospiel-Milwaukee and I recommend it!

Chevee is the designer of Scallywags by Gamewright. Has has also designed several games that are for sale on The Game Crafter that are worth checking out. My personal favorite is Tuesday Night Tanks.

I have had the privilege of enjoying an Oktoberfest celebration with Chevee and consider him a good friend. If you have not had the pleasure of meeting him, seek him out some day. Or twitter stalk him. (@cheveedodd). But enough rambling… let’s learn about him and his campaign.

Boards & Barley: Why did you start designing games? Why is this one of your passions?

Chevee Dodd: I’ve explored dozens of creative outlets in my time. Typically, I try something new and then get bored with it and move on. Games have been the one constant in my life since early childhood. I started designing because I found inspiration in James Earnest and his then startup, Cheapass Games. Suddenly there was a way for the little guy to do something on his own and succeed, so I went for it. I found that the creative outlet was extremely satisfying because I get to flex all sorts of skills: writing, design, crafting, and art. It encompasses so much of what I love to do.

B&B: We first met at Protospiel-Milwaukee last year. What do you think are the biggest benefits of designer conventions like Protospiel and UnPub?

Seriously, there is a great bunch of people at these shows that are more than willing to help test and refine. They love being creative together and some awesome projects have come out of that community… but for me, it’s the people. In fact, I generally have to be coerced to test my own games at these shows. I’m there to form relationships. We are all building something much larger than a few games. We are building a collective that will herald each others efforts for years to come.

B&B: What is your favorite non-Chevee game that you love playing more than anything else?

CD: Acquire is my all-time favorite. I would play multi-day marathon sessions of Acquire and never get tired of it. Also, Tichu. Oh my Tichu. With the right teammates, we’ll run it back to back to back. Best of 7? No problem!

B&B: Other than Pull!, which is your favorite Chevee game and why?

CD: Leathernecks ‘43/Princess Fairy Rainbow Unicorn dice is the only other Chevee game I’d actively ask someone to play. I generally don’t enjoy playing my own stuff but that design, and PULL! have both surprised me. I feel like I was able to inject just a touch of interaction into press-your-luck that makes the game something more without tacking on a bunch of thinking. I’m pretty proud of it.

B&B: If you could have a PBR with any two game designers, who would they be and why?

CD: Michael Schacht and Antoine Bauza. I’d love to have a PBR with Sid Sackson, but I don’t think that’d go over so well. Bauza and Schacht both design the types of games I love: simple rules with deep decisions. I’d love to talk shop with them… but being that they are both from more cultured areas of the world, I have a feeling they’d balk at my PBR.

B&B: What are your three favorite pieces of advice for new game designers?

CD: 1) Fail. Fail often. We learn so much more from our failures than we do our successes. It’s hard to know why something works, it’s easy to spot why it’s flawed.

2) Try. You can’t fail if you don’t try. Talking about designing games is way different than actually doing it. Just try. Get out the pen, paper, and scissors and go at it.

3) Ask. Get help. You can’t do this alone, no matter how great you think you and your idea are. You WILL need people to help you with the design and it’s better to start early than late.

B&B: I love your “Open Source” game design approach where you utilize open source software and like involving other people. Where did this philosophy come from?

CD: I’ve been a hacker of sorts all my life. Not a hacker in the movie sense of someone that breaks into banks security systems and steals money… a hacker that makes things by learning and deconstructing. I started writing software when I was about 8 years old… that was before the Internet as we know it today… and I relied heavily on books to teach me what I was doing. When services like American Online, Prodigy, and CompuServe came along, it was like opening a floodgate for me. Suddenly there were all these free references and resources available for me to learn from and my progress with software increased rapidly. I like giving back for this same reason. If I can help someone else through my stories and tribulations, I’m all for it.

B&B: You utilize The Game Crafter for prototypes and components quite a bit and I know you have a few games available on the site. Do you have any other “go-to” resources for game design components?

CD: The dollar store. Most of what I work with outside of printed components are things like sharpies, tape, paper, pens… all the stuff that’s readily available at a dollar store. But also, you can find stuff you didn’t think about there like glass beads and other trinkets that make great game components. I like to look everywhere I go for things that inspire.

B&B: What was the inspiration for Pull!?

CD: PULL! came about during a lull in my creativity. I asked the Twitter community to give me some ideas and it was the one that stuck out. I tried working through some of the other concepts, but this one just wouldn’t’ leave my head and I had to make it. 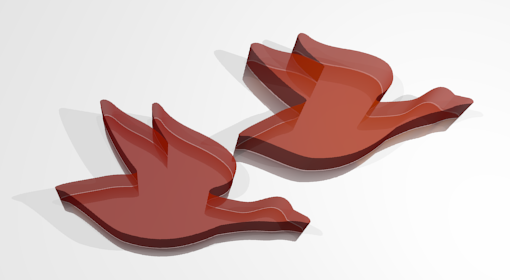 These awesome duck tokens are only a $5 add-on! Bump your pledges, people!

B&B: What sets Pull! apart and makes it awesome?

CD: It plays like a trick taking game, but not like any you’ve tried before. There is a deck of cards driving each round instead of the players winning the lead and those cards also score you points. On top of that, there are two tricks each round instead of just one. There are many different levels of decisions that go into each card play but it’s not so complex that you can’t just sit down and enjoy it. In fact, I’d say it feels less challenging than most trick taking games even though it offers significantly more decisions.

B&B: What are the best ways for people to share the Pull! campaign so that we can get it uber-funded?

CD: Facebook has brought me the most backers. Simply hitting the Facebook “Like” button under the Kickstarter video has had a great impact on the campaign, but also unlocks a stretch goal! For all of Facebook’s reach, however, there are more communities that are actively involved in gaming like Reddit and Google Plus. Sharing there and talking about the game all over the internet is going to help bring backers our way. So far, I’ve been extremely humbled by the support I’ve received from the backers.

Some cards and the game box.

B&B: What have been the most challenging aspects of putting together a Kickstarter campaign?

CD: Simply the sheer volume of work. Putting together all the graphics. The copy. The videos. The art. I started months in advance and I’m glad I didn’t wait until the last moment! So many campaigns are obviously thrown together, I really wanted the PULL! page to shine and I spent many many hours editing.

B&B: Do you have any sources of advice for the Kickstarter campaign? Jamey Stegmaier’s blog, for example, has a ton of great Kickstarter information.

CD: I think I’ve read most of Jamey’s posts… TWICE. Seriously… there is a ton of stuff there to think about. I don’t agree with all of Jamey’s advice, but that’s not the point. The point is to get you thinking about all the aspects of the campaign. Other than Jamey’s blog, I listened to most of Richard Bliss’ podcast and spent Monday’s researching the previous week’s campaigns. I spent a great deal of time analyzing both successful and unsuccessful launches for anything I could use to my advantage.

B&B: Do you have any personal advice to offer people that will be setting up their own Kickstarter campaigns? What key aspects of a campaign shouldn’t be excluded?

CD: The biggest piece of advice I have is to have an audience before you launch. Kickstarter is NOT a marketing platform and you need to sell yourself WELL before the campaign. I’ve spent the last two years building myself up and that got me nearly 70 backers on the first day. Now that the campaign is in full swing, they are barely trickling in… and most are finding the campaign because of my awesome backers sharing the campaign. Very few are coming in from Kickstarter alone.

As for exclusion: be transparent. Don’t hide any aspect of your game or the production. Even if there is something you are embarrassed about, you need to point it out. Dont try to trick people into backing your project. Let it sell itself. Be 100% transparent, good or bad. It may not pay off on this campaign, but it certainly will in the future!

B&B: Game design, Graphic design, Woodworking. How is the best way for people to reach out to you for design advice or graphic design work?

CD: I answer Twitter more than anything… and quickly. The notification sound for Twitter is my favorite on my phone. I grab it up as soon as it goes off. After that, email is the second best method… and my gmail account is also linked to my phone.

B&B: What other great things can we look forward to from Chevee Dodd over the next year or so?

CD: I designed a pretty neat 2 player zombie game that’s coming up. The artist that’s working on it is doing great stuff and I can’t wait to share it with the world. I designed it for Jayme though, so I’m not letting anyone else have it before her. I’ve considered bringing it to Kickstarter also, but it’ll likely be up as a print and play and maybe at thegamecrafter.com long before. I can only handle so much stress in one year.

Other than that, I’ve hinted at a secret project a few times over the past few months. The announcement of that should come mid-July, and it should be fun. Mayfair is still plugging away on developing Hedeby. Even if they greenlight the game, I doubt it will be out in the next year, but who knows?

B&B:Anything else you want people to know?

CD: I am forever indebted to this community and am constantly humbled by the support I receive. I would like to thank each and every person individually, and in person. I hope one day we can meet to make that happen!

Thanks, Chevee, for the interview. I wish you the best for the rest of the Pull! campaign and I hope it does really well for you. For those who read this, if you haven’t backed the project, go do so now. If you want to learn more about Chevee and what he does, head on over to his website: cheveedodd.com.

Posted on May 1, 2014, in Interviews, Kickstarter, The Boards and tagged Chevee Dodd, game design, kickstarter, Pull!. Bookmark the permalink. 1 Comment.