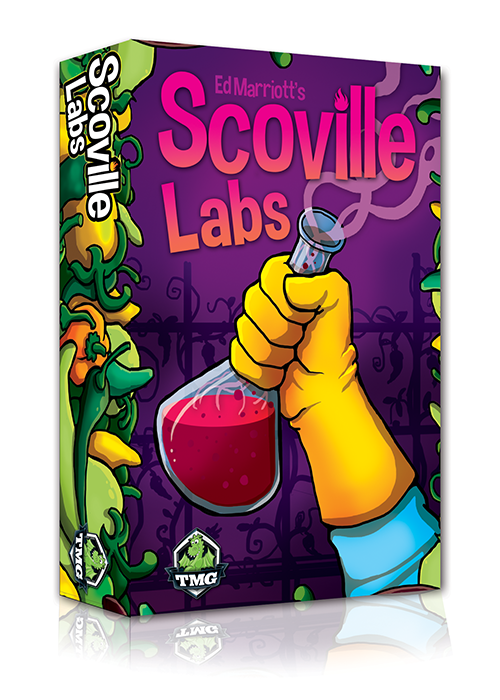 The following information is from the Kickstarter campaign page…

What’s In The Box?

Scoville Labs is an expansion for Scoville. [the base game is required for play.]  In the box you will find:

And there are stretch goals, so when the project receives enough funding then we’ll get more awesome stuff in the box! Go check out the campaign to learn more about the stretch goals.

What Makes It Special?

The laboratory workbench for the blue player.

Scoville: Labs is great because it gives players something they lacked in the base game: Control. Now that the competitors in the Scoville Chili Festival are allowed to do their own research they’ve all installed their own lab. The lab allows a player to plant and cross-breed peppers outside of the influence of other players. Now they can have more control over some of the peppers they will receive, and when they will receive them.

Using the 3 x 3 pepper lab players may plant a pepper in one of the pots each round. In subsequent rounds whenever a new pepper is planted it will immediately cross breed with the peppers directly adjacent to it. No one can mess with your lab, which means you have control over what you want to harvest from your lab.

I really like how the simple 3 x 3 personal lab can modify the game in such a fun and exciting way. I’m looking forward to seeing what you all think of it.

Plus, the expansion comes with more of those awesome peppers! So go check it out today! I’d love your support.

Posted on August 11, 2015, in Board Game Night, My Games, Scoville, The Boards and tagged board games, Expansion, kickstarter, Scoville, Scoville: Labs, Tasty Minstrel Games. Bookmark the permalink. Leave a comment.