For a long time I have wanted to design a game around the 3D world of M.C. Escher. My dad had a picture of the Escher waterfall hanging in his office. I was always captivated by the impossibility and reality of the image: Impossible because it could not exist in a real 3D world, Real because it DOES exist in the 2D world of the paper.

Putting 3D objects into a 2D world allows for some awesome things to happen. You are aware of this if you have played the app Monument Valley, which I recommend.

I have been working on several concepts for a 3D-2D game based on impossible geometry like that of the Escher waterfall. I have made two different prototypes. One is terrible and is really difficult to turn into a game. The other I have been able to turn into a game and I’m ready to playtest it. Today I’m covering the latter.

Impossible is a real-time game of puzzle building and tile laying. It works similarly to Galaxy Trucker in that players will be grabbing tiles from a common pile. These tiles will then be added to their growing assembly. The objective is to create the face up Impossible Shape as quickly as possible to earn the most points for that shape. 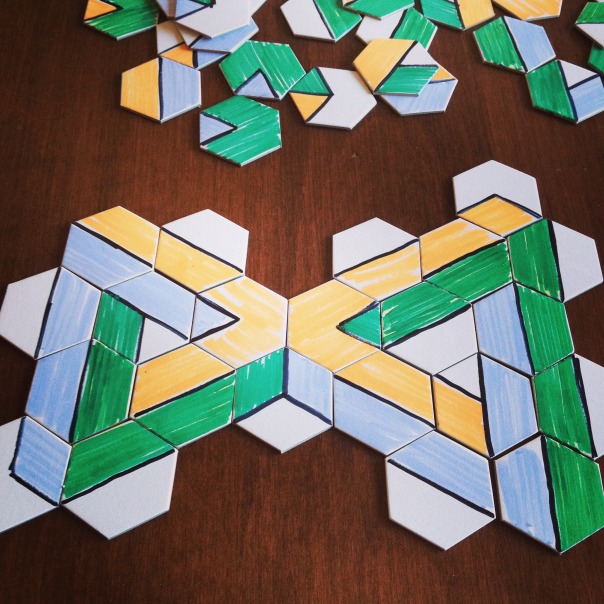 An impossible shape in 3D, but very possible in 2D.

The game is a set number of rounds. In each round a new Impossible Shape tile is drawn. All players will be racing to complete this shape.

When someone says, “Go!,” players will begin taking tiles and building their shape. When they complete the shape they can place a meeple of their color onto the shapes tile to claim the highest remaining points for that shape.

Once all players have completed the shape the round is over. The tile is placed to the side for endgame scoring. Players put all their pieces back into the pile. A new Impossible Shape tile is drawn and the next round begins.

The total list of components for the game includes:

It’s a relatively simple design with a succinct components list that should make it relatively risk-free and publisher friendly.

Because players can create the impossible shapes in different ways it leads to the need for many different designs on the hexagonal tiles. A simpler solution was to have “correction tiles,” which in this case are rhombuses.

Here is an example based on the image above. In the example a player is working on the left half of the image above. In their haste they grabbed the wrong tile for the upper corner. But instead of wasting precious time searching for the correct tile they realize that they can place an orange/purple rhombus over the wrong part of the tile. This allows them to have an accurate representation of the impossible shape.

The player uses a correction tile to make the shape correct.

The downside of the correction tiles is that each one is worth -1 points. So players should try to avoid them.

Below is an example of an Impossible Shape tile. The first person to complete it will receive 7 points at the end of the game. The second player will receive 4 and the third will receive 2. 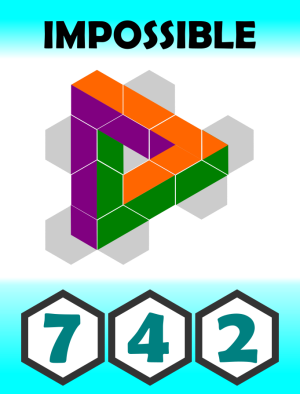 After a number of rounds agreed upon at the start of the game, all the points will be tallied and the winner will be determined.

Overall Impossible is a fast paced real-time game where you are racing against your opponents to build impossible shapes. Do you have the mind it takes to figure out the shapes and grab the right hex tiles? I’m pretty excited for this game and I’m looking forward to seeing where it ends up.

Thanks for reading! Let me know what you think about the design.