10 gallons of beer that I didn’t have to bottle!

I totally missed out on National Drink Beer Day yesterday. I’ll redeem myself by enjoying one of my two kegged beers shown in the picture. I’ll write about my first kegging experience tomorrow. (Spoiler: I never want to bottle again!)

But today is Monday, so it’s time to cover the Boards & Barley that I’ve enjoyed over the last week. With a Board Game Night and a date night with my wife where we played games I was able to get a nice assortment to the table. But let’s start with the Barley.

My friend Jeremy describes this as the best domestic Oktoberfest. I agree with him. This is a very excellent beer and I’ll often choose it over the German Oktoberfests. Is that beer heresy? Doesn’t matter to me. New Glarus has produced a truly fine Oktoberfest. Next time you’re in Wisconsin in September or October, make sure you try it! 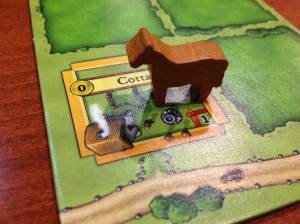 This game is my Spotlight game this week because I was able to get my wife to play it. She graciously learned a new game and when it was done said she’d play it again! That’s a big win for me. I’ve wanted her to learn Agricola for a while so introducing her to ACBAS seemed like a good intro. The gameplay feels roughly the same and the pasture/animal elements emulate those in the full game. So I think she got a feel for how Agricola would go. I’m excited about that.

This past week was a good one. I finished up prototype art (haven’t done that in a long time) and I got The Grand Illusion to the table for it’s first two playtests (It had been a long time since I put a new game design on the table).

It’ll be magic if I can find time to read these.

Since the playtests were successful (I should write an article on what makes a playtest successful because I think that can mean a lot of different things) I thought I’d do a little more research into magic and the late 1800s-early 1900s magicians. I picked up a few books. I have no idea when/if I’ll have time to read them.

I think the playtests were successful for two main reasons:

Playing to completion is a big metric for me. If you can design a game on paper or in your head and bring it to the table such that it can be played in full, that is a big accomplishment. Of course, that doesn’t matter as much if the game stinks.

So I had the two successful playtests and I’m ready to implement some good initial changes to things that were obviously not perfect. I think there are good things ahead for this game.

Today I wanted to report on the progress of The Grand Illusion. Normally I do that on Thursdays and I was planning on posting a game review today but I’m excited about the game so I figured I’d write about it.

I’ve begun prototyping! I have created a deck of skill cards. These cards represent the 9 types of magic in the game. The types of magic are in two separate tiers: basic and advanced. There are 6 basic types and 3 advanced types. Here is a picture showing the skill cards (thanks to The Game Crafter for blank cards – They have blank poker cards on sale right now for 1 cent each!). 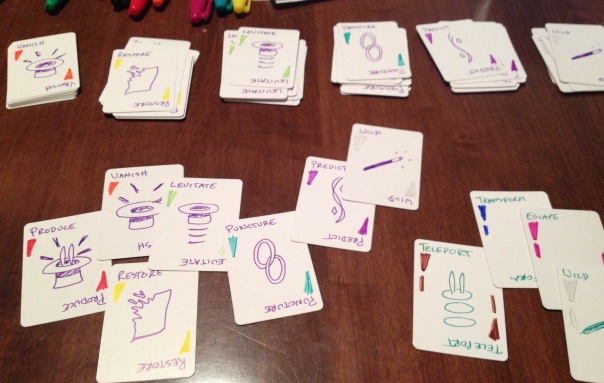 Collect these and use them to perform never-before-seen magic tricks to appease your growing audience!

Those are hand-drawn icons, people!

The next step for the prototype is to create a deck of Trick cards. These are cards that represent magic tricks. During the game you’ll need to collect the skill cards shown above and then turn them in to complete the magic tricks.

Once you perform a magic trick you will earn the rewards and audience shown on the card.

So let’s discuss audience… Audience is actually a currency in the game. It is necessary to build an audience during the game or you will not meet the requirements on your Grand Illusion card. So each time you perform a trick, if successful, you will gain audience. In the game you will collect skill cards, spend them to perform tricks, gain audience and increase your skills to be able to perform better tricks.

There will definitely be some engine building in the game. The goal of this design is to be an entry-level game with an easy rule set that is quick to teach and play. The main mechanics are set collection and engine building.

In The Grand Illusion the engine is represented by the skills each magician will gain. Will you become a master of vanishing acts? Perhaps you’ll be the best at restoration magic? Ultimately you’ll have to get proficient at at least two basic types of magic and one advanced magic.

The question I’m currently struggling with is how exactly to create the engine building element. I have two options I’m considering:

In the game Splendor players turn in poker chips to grab a card from the table. Once they grab that card it usually acts as a poker chip. So for future card grabs they need one less poker chip. This would work perfectly for The Grand Illusion but I don’t want to copycat an existing game.

A tech tree is something where you must complete “Level 1” stuff before you can work on “Level 2.” So in The Grand Illusion I could have a tech tree (pyramid) of trick cards on the table. When a player would perform a trick they would place a token of their player color on the trick to show they’ve completed it. This would also direct their play as there would be advantages and disadvantages for breadth versus depth.

I think that once I create the Trick deck I’ll try out both of these options. The Splendor-like version may work better, but I’m more drawn to the Tech Tree version since it is more original.

My goal is to prototype the skills deck this weekend and aim for the first playtest next week! Thanks for reading. I’d love to hear your thoughts about the different engine building options.

Today is the second in a series about designing a new game called The Grand Illusion. Via Twitter I asked for examples of different types of Victorian-era magic and illusions. Here are a list of some of them:

Of course there are others like sleight of hand, card tricks, collapsing cages, awesome tricks with electricity, etc. What I am looking for are core genres of tricks that can be used as the currency (symbols) in the game. So with that in mind I think there are several such genres that could be used. For now I’ll go with these:

That gives 6 “currencies” in the game that can be used for set collection.

The real question we need to be asking is, “How exactly do you play this game?”

As I mentioned last week the idea is that you are a street performing magician looking to gain a reputation, earn some dough, and eventually find yourself on a stage performing a grand illusion for the masses.

This will be mostly a card based game unless the direction of the game changes. For now I have created preliminary icons for the 5 main magic genres listed above (excluding the Grand Illusions).

Players will begin the game with a hand of cards. They will also have their “Grand Illusion” card, which is private. There will also be a few magic tricks to perform that are laid out on the table. In each round the magicians will perform a random draft.

Here’s how that will work. Each player will decide which card they want in the pool of available cards. So each player will take one of their cards and put it face down in the middle. Once all players have chosen a card, then one random card from the deck will be added. Then the player with the smallest reputation will pick up the pile, look at the cards, and play one face up in front of them. All other players will follow in order of smallest reputation.

Once all players have placed one of the cards face up, each will have the opportunity to perform a magic trick. To perform a trick you must have a set of cards that appropriately matches one of the face up magic trick cards. So a trick might require 2 “Escape” skills and 1 “Levitate” skill. If you have played these cards in front of you then you can complete the trick. Turn in the three cards you used and take the completed magic trick card and place it in front of you.

These completed magic trick cards will have an icon or icons on them that allow you to perform better magic. Some will have icons that are not available in the standard pool of cards that are dealt to players. So players must complete magic tricks to gain the skills they need to complete their Grand Illusion.

So now that the framework is set for how to play, the next step is for me to mock up some cards and solidify the actual gameplay. Here’s where you all can join me in the design. I want you to provide names for magic tricks. I’ll use these as the names on the prototype cards. If they are really good names then I’ll use them as one of the Grand Illusions.

Also, I would love your feedback on the basic gameplay here. As I was writing this article I realized that this game has a feel very similar to Splendor or The Builders. There is definitely some engine building with simple card mechanics. I’m not too worried about that since I think the drafting mechanic makes it different enough. But I really want your suggestions!

Posted in Grand Illusion, My Games, The Boards