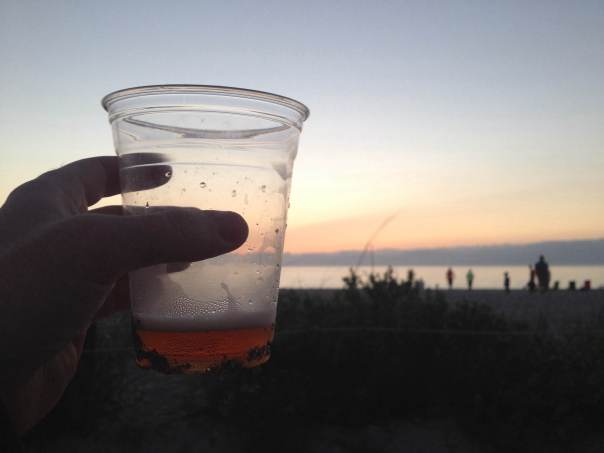 I’m back from my Florida vacation and I’ve got two weeks of Boards & Barley to report on, which includes a gaming weekend with my friends Brad & Kendra from Green Bay. So there is a lot to cover.

But first I want to remind you that my game, Scoville, is currently live on Kickstarter! Go check it out by clicking the link:

Now that I got that out of the way I can resume life as normal. While there’s no “Designer’s Corner” this week since all my focus has been on vacation and the Scoville campaign, here are the Boards & Barley that I enjoyed over the last two weeks:

Boddington’s Pub Ale: I enjoyed this from a nitro tap at The Mucky Duck on Captiva Island in Florida while watching the sunset (see image above). Does it get better than that?

Will you ride the wave?

Kona Big Wave Golden Ale: I bought this to try something new during our trip to Florida. It wasn’t very enjoyable and the housekeeping crew was rewarding with three of them that I left in the hotel room fridge.

Red Stripe: I enjoyed this one at a beach-side restaurant in Fort Lauderdale before sitting on the beach in 80 degree weather. I didn’t have to add in that last part, but it helped make the Red Stripe more awesome.

New Glarus Spotted Cow: I don’t recall when I enjoyed this, but this is a common beer to appear on the list.

Stone Arch Vanilla Stout: Brad and Kendra brought this excellent brew for the weekend. It is out of Appleton, Wisconsin. I thoroughly enjoyed it.

Estaminet: I got this with my dinner in Fort Myers since it was a Belgian beer that I had not had before. After drinking it I think it is to Belgium what Miller & Budweiser are to the US.

New Glarus Cabin Fever Honey Bock: And then there’s my current beer crush, which will continue to be on this list because it’s so good!

Redhook Winterhook: I chose this Seattle beer during the game Sunday night because I thought it would be a good beer. It was. And Seattle went on to dominate.

Left Hand Sawtooth Ale: I chose this Colorado beer at halftime to see if it would change the fate of the game. It did not. But the beer was pretty good.

The Little Prince x2: My wife and I got this to the table, sort of. The tables were really tiny and were at 37,000 feet. But The Little Prince worked pretty well in the airplane. This is a fun game for 2 players so it worked well for us to bring it on our trip.

Cribbage: My wife and I love playing cribbage and it is often a refreshing escape from meaty Euros. Unfortunately she pulled out the victory in the end.

Timeline x5: I have been wanting to play this game because it seems like a fun and light game that accessible to a lot of different gamer types. I wasn’t disappointed. We played five times with two expansions and rarely saw the same cards come up. It’s a fun, light game.

Tenzi x10: We also did some serious dice rolling with Tenzi. Tenzi is a game where each player has 10 dice and you roll them to try and get the same result on all of your dice. It’s like trying to get a Yahtzee but with 10 dice and unlimited re-rolls.

Boss Monster x2: I had not played this game before but it was a lot of fun. In the game you are trying to build a dungeon with different rooms that will destroy any hero that tries to enter. If you take too much damage you will lose. If you kill enough heroes you will win.

Kingdom Builder x3: It’s such an elegant and simple game with deep strategy, while at the same time possessing enough luck to make it frustrating when you get the wrong cards. But we love it and we’ll keep playing it.

Ticket to Ride – Netherlands: I really like the anxiety caused by the Netherlands expansion. Players have bridge toll tokens that must be paid for each connection you build on the board. Then if someone plays the same connection they have to pay you the same amount of bridge toll tokens. So there are incentives to playing your connections first, which is not the normal way I play. I love that they mixed it up!

Scoville set up for 4 players during a Gaming Weekend of Awesomeness!

Scoville: With Brad and Kendra in town it was fun to put my “final art” copy of Scoville on the table for us to play. They were both involved with Playtest #4 just over a year ago so they saw how far everything has come along. I ended up winning but only because Kendra didn’t realize that my wife and I each had a Platinum pepper left. So fun!

Village: I played this game over a year ago and remembered it being a little disjointed. You collect goods to use for different things, but all the resource collection and usage felt circular to me and then your people die and it didn’t seem that great of a game. Well I gave it another shot and it still felt the same way to me. I think the death mechanic is really the driver for the game. I’d like to play it one more time before I officially rule it out, but it’s on the fence for now.

Farmageddon x2: I love this game even though it can be infuriating! Players plant and try to harvest beautifully artistic crops to earn money. But other players are lurking to hinder your progress. Can you be the best farmer and earn the most money? And a new expansion should be coming soon! I’ll be picking that one up.

Targi: I bought this at GenCon from the Cool Stuff Inc booth for $20 and I finally got it to the table. It was worth the wait. This was a lot of fun and the decisions were dramatic and tense. I really enjoyed the back and forth concept of blocking your opponent. I’m looking forward to playing this again.

Eminent Domain: I got my copy through Kickstarter and we got it to the table. It is a very fun take on the deckbuilder genre. Each card has both an ACTION and a ROLE. So depending on how you build your deck you can start to tailor your game. I’m very excited to try out the expansion!

Compounded: My wife finally got to play this and she really enjoyed it, which says a lot! We all had a great time playing this. It’s such great game. It was a bit unusual though since we played with the lab fire cards randomly located in the compounds deck. And twice the came out stacked. So the lab was pretty safe after that. I need to learn to shuffle better.

And I probably forgot a few games because we wrote them down on paper instead of recording them on my phone. Never the less, it was a great two weeks of gaming for me!

Those are the Boards & Barley I enjoyed, what did you enjoy?

Posted in Kickstarter, Monday Brews, Scoville, The Barley, The Boards