Well, we’re off to the start of a great week! And since it’s Monday, that means I get to talk about beer! It’s been a while since I discussed my brewing adventures. They’re just not as exciting as board game design. But I’ll get you all up to date on what I’ve been up to.

My first taste of Alberti Amber

As you know I bottled my first beer about a month ago. That was my Alberti Amber. It is named after Leon Battista Alberti, a 15th century Italian renaissance man who invented the Alberti cipher.

I have now been able to enjoy the beverage and I was asked to give a 140 character “Tweetable” review of the beer. After the first bottle, which had been in the bottle for about two weeks, here’s what I had to say:

Alberti Amber: delicious first #homebrew, not too hoppy. Could use a little maturing and a little more carbonation. Wife likes it, 'nuf said

I have since had a few more and I can tell that maturing is making them better.

One of the things that I was worried about was during fermentation my basement was a little too cold for the yeast to throw the kind of party they like to throw. So the result is that this particular Amber Ale is a little sweeter than normal. I actually think it helps to give the beer a little character.

Overall I’m very pleased with how it turned out. I may try to brew the same thing again and see how much different it would taste. 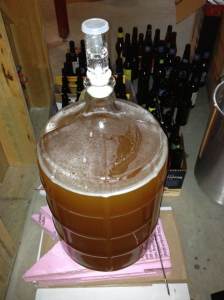 I think this one will be good!

My second beer is currently in the carboy. It has been in there for just over a week and is therefore ready for bottling.

So the brew is sitting patiently in the carboy, just waiting to be bottled. I may try to get that done tonight since I’ve got a busy week. I sure hope it goes better than with the Alberti Amber.

That’s all part of it though. I hope this turns out to be an awesome summer beer! Hopefully I won’t drink it all before summer officially starts.