← Minute to Win it? A Review of Mad City
Hexes & Hops Favorite Things →

Yes. My Wisconsin Badgers are in the Final Four! What more could I ask for? This isn’t a sports blog so I’ll spare you the awesome details, just be aware that I’m excited about that.

This is, however, a blog about beer and board games. And each Monday I share a recap of the Boards & Barley that I enjoyed the previous week. So I welcome you here to see what I enjoyed. If you enjoyed something special, please feel free to comment below!

I’m not an IPA guy. I’m not a hoppy guy. But I’m sick of sharing those two disclaimers. So by golly I’m gonna start enjoying these types of beers. There are so many of them out there that I don’t want to exclude them any longer.

So I started this new escapade with the Redhook IPA at a recent board game night. I was pleased by the lack of over-the-top hops. It was bitter, but not unacceptably floral. So I’d say I would enjoy this again. I’m excited to be branching out into a new realm of beer. I’m sure I won’t enjoy them all, but at least I’m diving in!

I’m not sure why Quantum Orcas still exists. It’s probably because it only takes 10-15 minutes to play and has a quirky theme. No matter the reason, it is still around and it keeps getting better. I’ll give more details below, but Quantum Orcas has gone beyond “pet project,” as a good friend mentioned, and it’s now a legit game design. I’m pretty excited about that.

As I mentioned above I’ve kept working on Quantum Orcas. The biggest change I recently made was to change it to allow for 4 players. Previously it was only a two player game. Ultimately there is no good reason for this not to be playable up to 4.

So I designed decks of cards for each player and had my first ever 4 player playtest. It worked pretty well. I don’t think people were in love with the game, but the changes I implemented made it quite a bit better.

Another thing I changed was how the asteroids move through space. (Timeout… I thought this was a game about killer whales eating boats? What’s the deal? Well I changed it based on feedback and now you are an orca in space eating asteroids. That’s the deal!) Previously small asteroids would move toward the upper left corner of the 4×4 grid and large asteroids would move to the lower right corner. This caused a large pile of small asteroids in the 1, 1 spot. And players just didn’t think that helped to make it fun. Now small asteroids move up on the board and large move down. They both follow the star lines on the tiles on the board. This seemed to work quite well without increasing the fiddliness. 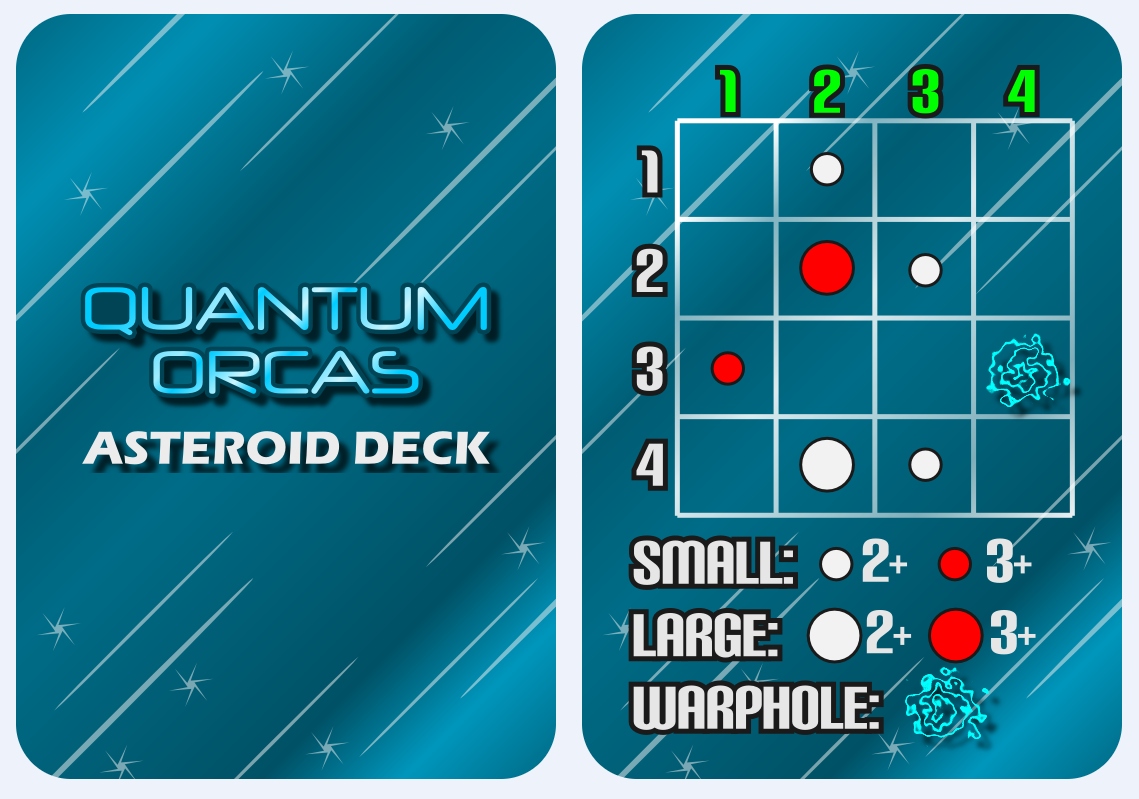 These show the placement of new asteroids and the Quantum Blowhole for each round.

The other change is that I now have an Asteroid Deck. The card example shown above has already changed after I received a suggestion of having the rows be labeled A through D instead of numbers. I originally had numbers in two colors because you would have to roll two d4s for each asteroid that you were to place. That was the fiddly part. Now there are 16 cards for seeding, 8 of which are used in a game of Quantum Orcas. These cards help speed up the game a lot!

The other game you might have heard me talking about is Brooklyn Bridge. I love this game. It has a unique time-based worker placement mechanic that has received awesome feedback. People really seem to love it. The biggest issue with the game currently is that it takes too long. I recently received feedback that will help me cut that quite a bit. I am actively making changes and trying to cycle through playtests with this game. I think there is a lot of potential here and my plan is to have 30 playtests completed and have a refined game by GenCon.

I also came up with a new game design based on a conversation with a co-worker. I don’t want to share any info yet, but I think it could potentially be a really amazing game. The only detail I’ll share is that it would have a space/sci-fi theme.

So those are the Boards & Barley and game design efforts I enjoyed this past week. What did you enjoy?!

← Minute to Win it? A Review of Mad City
Hexes & Hops Favorite Things →