I’m sick of that old Boards & Barley motif. So I’m switching it up for the foreseeable future. Today I want to provide you with a list of my favorite things in the gaming and brewing world. There are many things that make both the gaming and brewing hobbies awesome and I imagine you will share in a lot of my opinions today. Let’s start on the Hops side of things…

Perfect color! (And flavor, for sure!)

I’ve had Bocks, Cream Ales, Dunkelweizens, Trippels and just about everything that you can think of. I just can’t help but possess an affinity toward the American Adjunct Lagers. I mean, so many people drink them that you can’t help but love them. And the television advertisements with Clydesdales and Vortex bottles are AMAZING!

Plus, my family is all geniuses (according to MENSA) and they prefer American Adjunct Lagers. So of course this would be my favorite beer style. Also, I really prefer my beer looking the same coming in or going out. The clearish yellow color is ideal for that. ‘Merica is really nailing in on the head with this beer style!

Sure, some of you may prefer those high end establishments with 40+ beers on tap from all over the world. You’re wrong. The college bar seen, with it’s 3 American Adjunct Lagers on tap or buckets of 5 cans for $6 are the truest beer scene there is. And they usually have so much history. Often they are named after some famous old dude who somehow managed to skirt the law during Prohibition. So they’ve got history and awesome beer at incredible prices.

See how happy everyone is? College bars are the best! 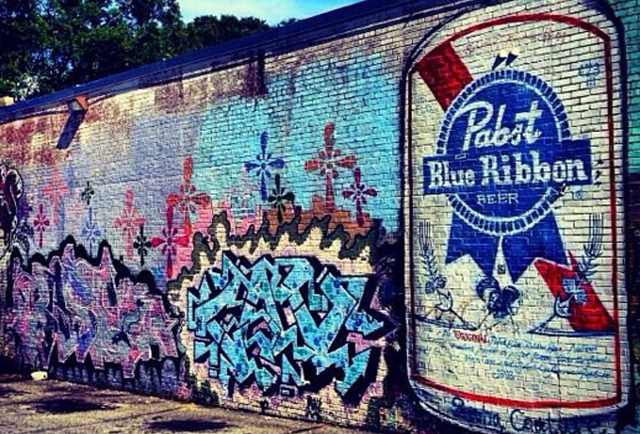 Just like graffiti, PBR has a special place in many people’s hearts!

I’ve gotta be a homer on this one and choose a local beer. Anything that wins a blue ribbon is fine by me! PBR is from Milwaukee, where I grew up. So maybe I’m biased. I’m not. It’s fantastic beer and I’m just finishing my third of the day.

Did you know that it’s also perfect for eating with your cereal. I actually prefer pouring an ice cold PBR over my Honey Nut Cheerios instead of milk. When that sugary layer on the Cheerios melts away you are left with a PBR that is infused with the sweetness of honey. So Good!

There’s nothing better than having to wash 50 bottles, a plastic 5 gallon bucket, an auto-siphon, 50 bottle caps, a plastic tube, and some plates to rest the stuff on. Boiling the wort is alright. Transferring the beer from the plastic fermenter to the carboy is fine. But the best part of homebrewing is getting to spend three hours with my 50 newest friends (the bottles). Sanitizing and filling each bottle one at a time is so fulfilling! Why would anyone ever want a kegging kit. Those people are totally missing out!

Those are my favorite HOPS related things… lets move on to my favorites from the HEXES category!

I grew up with this game mechanic. I think we all grew up with this mechanic. And obviously this choice is backed by nostalgia. But seriously… when the game can play itself in such a way that you are sitting there like you’re at the movie theater, that’s awesome!

Think about it… you get the awesome tactile feel of a die in your hands. You shake it, some people blow on it, and then you drop it to the table. Then tension fills the air as you are wondering, hoping, dreaming of seeing the right result on the top face. Sure, sometimes you don’t get the result you were looking for. But when you do it’s as if you’ve got a scissors in your hands and you’re cutting down the nets on your way to the Final Four! Does it get better than that?

I won’t call it “Analysis Paralysis” as I don’t like that derogatory term. However, the player who thinks through their decisions is really the wisest of sages. They can see the big picture. They can calculate like a NASA rover crew. They know how to optimize their every move. To watch a Thinker in action is like watching Van Gogh paint sunflowers in a field on a warm summer day. Glorious!

The other advantage is that while The Thinker is choosing his or her action it allows for you to have the time to emulate their truly genius play style. Their awesomeness in thinking each decision through and through is what allows you to become a better player by also having time to think about the moves you will make when your turn comes up in 10 minutes.

From now on you should treasure and embrace the Thinker!

Some people would probably dislike finger lickers. They’d say something like, “They lick their fingers, then touch my game components. It’s like my game components have been in their mouths!” I disagree. Finger licking is an ages old way of cleaning the crud off your finger tips. Let’s face it, we usually have snacks that stick to your fingertips as you’re eating them. Doritos are guilty of this, but let’s not blame the delicious chips. What better way to clean off your fingers than to lick them, right in front of everyone, so they all know that your fingers are clean? I mean, can you imagine if people had to walk all the way over to the bathroom to wash their fingertips every time they had a snack? Games would take forever!

I’m a fan of the KISS method (Keep It Simple, Stupid!). Glory to Rome utilizes the KISS method greatly! The art is so simple. It gloriously portrays what the game is about. The vivid use of color gradients is strong with this one. Check out the box cover:

Simple Font, ✔. Picture of game, ✔. Cartoon art of crazy dude with sword, ✔. Non-cartoon art of roman building, ✔. This game has it all!

I can’t take my eyes off that awesomeness! If you can, then here are two Runners-Up for you: Letter head and Europa 1945-2030.

Tech Support: Allowing us to relive our great experiences since 2005!

Some games have themes we can’t relate to. Whales in space. Building Bridges. Cross-breeding peppers. You get the idea. But there are some games that are so accessible. There are games that everyone can relate to. This game, Tech Support, is just that!

I mean, everyone loves great tech support and we can all relate to it. I can’t think of anyone I know who hasn’t had a great experience with tech support whether it was about their computer or their phone or their cable. So of course this is a perfect theme with a HUGE potential audience!

There are a few favorite game designer tips so I’m lumping them all together here.

There you have it. Those are some of my favorite Game Design Tips. I hope you learned a little something from that list!

I’m excited to be kicking off this new Hexes & Hops motif with such a great article. Thanks so much for reading. In the rare instance that you may disagree with my choices, please feel free to comment below! You’re the best!