Happy Monday everyone. I hope all of you that attended PAX East of the Gathering of Friends had a great time. I attended neither, babysat Saturday evening, and played one game all weekend. But that’s okay.

Today is Monday so I present you with me recap of the Boards & Barley I enjoyed last week:

I enjoyed this Porter at a dinner on Sunday evening with my wife for her birthday. The Porter is from the still new Wisconsin Brewing Co. I found it to be a very nice porter with characteristics one would expect from a porter. I would drink it again as it was easy to drink and enjoyable to taste.

They recently brewed a coffee porter that is only available on tap. I would definitely like to try it since I enjoy coffee flavored/infused brews. 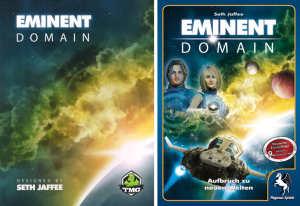 For those who are sick of Dominion and don’t like the theme of Trains, I highly recommend Eminent Domain!

The only design efforts I completed last week were from the Design Me article where I designed a new tile placement via dexterity game called ManHunt.

This week I hope to compile and balance the abilities in Brooklyn Bridge as well as make some modifications to how the Tower is built. These will make the game more “Euro” in style, which I am fine with.

I also have the necessary components to prototype Manhunt, which I just might do.

So those are the Boards, Barley, and Design Efforts I enjoyed last week. What did you enjoy?

For those reasons I don’t hesitate when they launch a new project on Kickstarter. I know that their game developer, Seth Jaffee, will have done an amazing job making sure the game is refined and awesome. But most importantly, TMG’s games are fun to play!

For those of you who are unfamiliar with the game here is a little background. Eminent Domain is a deck-building game with a space-based theme. Players are trying to settle the most planets, research the most technology, and gain the most influence. Each turn you choose a card from your hand and do the action listed. These actions are things like Gain a Fighter, Colonize a Planet, Survey New Planets, and Research Technology. After performing the action the player will take a card from one of the piles on the table. They then perform the Role of that card. These roles allow the player whose turn it is to reap some benefit. Then all the other players can “follow” by doing the role or “dissent” by drawing a card into their hand. That’s basically how a turn works. To learn more check out Tom Vasel’s review of the game:

I really enjoy this game. I first played it last year in the GenCon library. This expansion looks like it will really add to the game. It adds the capability for a 5th player. It allows for direct conflict. It adds new technology cards. And it will add different starting scenarios, which adds a lot of flavor and replayability.

Posted in Board Games, Kickstarter, The Boards